Looks Like I’ll Have to Change the Name of this Blog, Part II

[Continued from Part I]

So, on Saturday during Bounding Main’s 2:00 show I was interrupted during a song introduction by an audience member.  We have a pretty wacky and interactive group of fans (“Bounding Mainiacs”) and environmental theater is all about improvisation so someone walking up to us and initiating a conversation is not out of the ordinary.

“Who is the captain of this group?” she asked.

Everyone looked at each other and pointed to me.  “He’s our captain,” they said.

“Well, let’s see what we can do about that,” she declared.  Then our friend Jonathan Winski walked up on the other side of the stage.  Instead of his casual renaissance faire garb he was wearing his dress uniform for the Cambridge Area Emergency Medical Services, for which he is a chaplain. 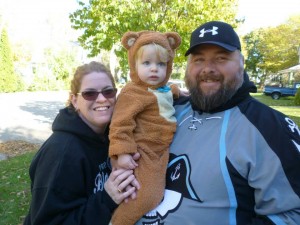 It is hard to describe Jon without using the phrase, “Larger Than Life.”  He is a martial artist, an ophthalmic technician, trains actors in combat for films, runs Midwest Knife and Axe and exhibits at fairs and festival all over the Midwest.  He is an ardent Milwaukee Admirals fan and is the person responsible for connecting us with the team marketing director so we could sing the national anthem for a couple of different games.  He is a proud father and husband and, as I mentioned, is a chaplain.  Jon takes all of these things very seriously and also with great joy.

He is also a Bounding Mainiac.  Two years ago he took us all out to dinner on the Saturday night of last year’s Janesville Renaissance Faire.  He took the time to tell all of us how important and uplifting our music is to him and his family.  Explaining that as part of an EMS team he sees more than a fair share or people in rough spots, some of which are his to console and uplift.  He said that when he has spiraled down because of trying circumstances our music has been a means for him to be, himself, elevated.  This is the highest kind of praise we could receive.

So, dressed in his capacity as a chaplain for he took the stage and had me step forward.  He spoke, “Dean Calin, seeing the need, you have not only organized the beginning structure of Bounding Main, you have continued to guide and develop the unity of this crew to serve the world through maritime themed music.  Bounding Main continues to serve across the seven seas and all land it meets with unparalleled sincerity and entertainment to sailor and land-lubber alike.

“Since Bounding Main’s inception you have led your crew in faith and well-earned trust.  Your success has largely been due to your choice not to lead from in front, but from within, as part of a whole.  And your crew respects you for it.

“Dean Calin, please raise your right hand and be sworn in, officially as Captain of Bounding Main.

“Knowing keenly the call and purpose of this crew, do you accept the office of captain, and pledge to continue to lead this incredible crew with passion, direction and a light spirit to the best of your ability and continue to share your gifts with the world?  If so, say “I do.”

He continued, “Then it is my honor as chaplain of the Dane County EMS Honor Guard to officially recognize you, Dean J. Calin, as captain of Bounding Main, on this 16th day of May, in the year of our lord 2015.  May your compass be true, the winds fill your sails and skies be fair!  I wish you the best.  God bless you.”

The respectful silence from the large audience was quite telling.

“I officially charge you to lead the Bounding Main crew.  ‘Command is yours, Captain!”

And he saluted me.  Respectfully, I saluted him back.  There was a crack of rifles from behind us as members of the Guilde of St. Michael had marched up behind us during the swearing-in.  Damn.

He then presented me with a framed certificate (notarized by Tiffany Savage, who was the “pirate” who interrupted our show in the first place).  The certificate, from the Dane County EMS Honor Guard, grants me the title of captain, and immediately retired me from active service so that I could go on to pursue further musical endeavors with Bounding Main for the benefit of the world at large. 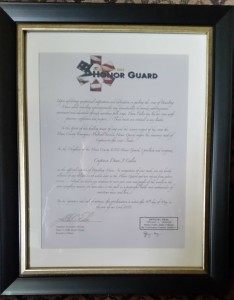 This was not something that I ever would have expected, not in all of my wildest dreams.

We did not sing a lot of songs during that show.  And evidently the pollen was bad that day as many people were wiping their eyes and blowing their noses.

And after Chaplain Winski stepped down, my irreverent, wise-cracking fellow Bounding Main members saluted me, too.  That simple and sincere gesture meant as much to me as the title itself.  Of course later there was eye rolling as flower petals were strewn before me.  Nothing has really changed except that we have the quiet knowledge that the bugbears can cast aspersions all they like because now, technically, I am a captain.

Tags: by any other name, community, friendship, renaissance