Looks Like I’ll Have to Change the Name of this Blog, Part I

Let’s call this Part One of the story. 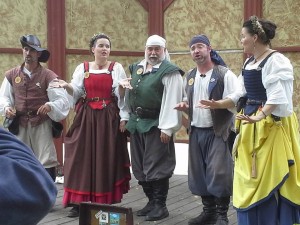 In the various performances of the vocal group, Bounding Main, the rest of the vocalists will occasionally refer to me as “captain.”  It is as fictional a construct as the Elizabethan mariner costumes that we wear.  It is part of the improvisational storytelling that we use to move from song-to-song.  We refer to Jon as the purser, a term with archaic origins to designate that he is “the money guy.”  We refer to Gina as the navigator as a tease for her having switched left for right on a couple of occasions.  Like that.

One day, seemingly out of the blue, I received an irate email from a fellow performer in the maritime music genre.  He is well-established in the folk music community, and has significant involvement with tall ships and the sailing of contemporary craft.  I have the deepest respect and admiration for this fellow.

So, this email took me aback when I read the content of his passionate letter.  The gist of it was that there are performers in the maritime music community who have studied long and hard for their maritime captain’s license, who have commanded actual tall ships out on the open water, who deserve to be called “captain” because they earned it.  I was not even an AB (able seaman) – had no rating whatsoever!  Yet I dared to call myself a “captain!” It went on and on for a while like this.

My take on the whole thing, of course, was that like captains Kirk, Crunch and Kangaroo, my being a captain was not a claim to being a real officer, but a performance sobriquet.  But I made the mistake of allowing his problem to become my problem; after all, I was being accused of stolen valor.

So I started referring to myself as “Not a Captain.” I created an email address that was nac54321@ … (Not A Captain … count down from five to let the anger dissipate …) and otherwise making light of the situation.  This has been going on for about five years and eventually one realizes that there are far more important things to worry about.

Then something truly remarkable happened during the 2015 season of the Janesville Renaissance Faire.  Life can have a funny way of surprising you with unexpected gifts from unexpected quarters.  More on this story later. [Part II]

Tags: anecdote, by any other name, irony, maritime, personae