I fear this message getting lost in the post-opening weekend of the 2016 Bristol Renaissance Faire Season, but I want to share an epiphany with all of my friends.

Back when I was in high school in Chicago some friends of mine and I started what would become the worlds largest independent Star Trek fan club. Over 150 people joined, we had meetings, published a newsletter/fanzine, watched original series episodes on an actual film projector – it was a great time. 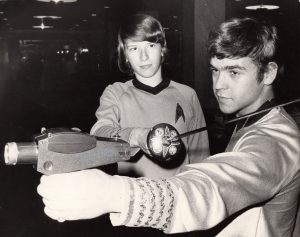 There is a considerable crossover in fandoms (Star Trek, Starsky and Hutch, Battlestar Galactica) both today and even back then. Some of us also got involved in an historical reenactment group that was hired by King Richard’s Faire to perform combat entertainment for the patrons. The horsed jousters hadn’t made it onto the scene yet so they called us “foot jousters.”

I was the summer between my sophomore and junior year of high school, I was sixteen years old. Few people in our group know my age, assuming I was older. It was an amazing season for me as the girl that I had followed into the group called off our relationship to follow personal relationships with other men in the group. I was devastated, she being my first real “love.” However the social interactions both at Faire and within our group very much helped me recover my sense of self worth and if not find “love” again at least helped me find value in who I was and what I could be for other people. 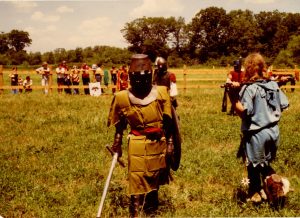 It was also my first public entertainment opportunity. While what we were doing (actual sport combat) was not the ideal goal for our director (theatrical combat) we were coached to play the tournaments to the audience and it was a heady experience for a sixteen year old who had only performed in school plays before.

I went on to perform another season with that group but later returned, in 1985, as a performer with the Ring of Steel and a script writer for the “Elf and Wizard Show.”   The shows at the old College of Wizards (where the memorial gardens of Bristol’s Court now exists) were fantasy fan favorites – an audience that was cast aside for many seasons. Those were years that held memories both terrible and wonderful that I review with some amazement. 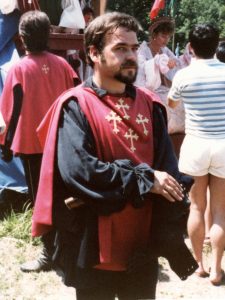 King Richard’s Faire became the Bristol Renaissance Faire in 1988. It was a strange time, like a ship sailing without a rudder. With day-job obligations and a non-faire relationship taking my focus I stepped away for a couple years. 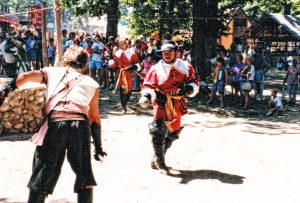 In 1995 I was asked to join the ensemble cast again: the “fight cast” needed experienced people and this time I was offered a “good guy” role: Jake Humphries of the Bristol Harbour Seadogs. Though the concept was liberated from a group at the California Renaissance Faire we certainly made it our own. It was great to develop the identity of a troupe that proved to be very popular with the audience at the faire. I created a web site for the group which developed into the Bristol Discussion Page or “Bristol Board.” That was a popular thing, a community news source and communications tool which pretty much ended under the stewardship of my friend Tom Charney when Facebook became the ubiquitous monster that it is today. 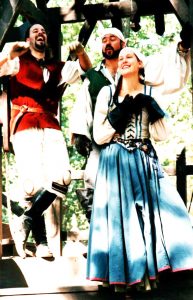 In 1999 some associates of mine and I raised a considerable amount of venture capital for a dot-com in the aerospace industry. Demanding all of my attention I took a hiatus once again from the faire. This also coincided with the end of my first marriage; the change of scene was important.

The after-effects of the terrorist attacks of 2001 was a catastrophe to the aerospace industry and our dot-com. I continued my career in aerospace but as I was no longer an owner of a company I was able to return to entertaining. About 2002 I was asked by a dear friend to assemble a maritime vocal group for a young renaissance faire for which she was the musical director. As a “Seadog” in previous years at Bristol I learned Sea Shanties from Diane Leo and in previous years from Rob Middleton. I assembled a great group with Stephanie Steph Lewin-Lane’s help. (Interestingly, I almost got both Greg Larson and Heath Denikas in the group, who eventually went on to do great things together as 2 Merry Men.)

After a season of that small faire was over I thought that what we did was really significant. We had organically acquired some real talent through the run of that event and I asked the people involved if they wanted to be a part of a permanent group. We lost some of the original group and gained others from unexpected quarters. We eventually became Bounding Main and we’ve been performing together across North America and Europe for nearly fourteen years. It remains the very best entertainment endeavor I’ve ever had a hand in creating. 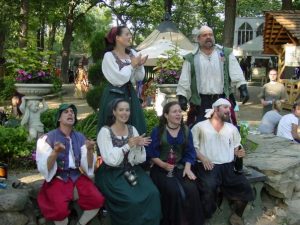 Bounding Main’s first year as a group at the Bristol Renaissance faire was in 2003 and we’ve performed continuously through this year, 2016. 2003 was also my last year performing in the ensemble cast – something had to give! Bounding Main’s focus became maritime-related and it forced us to limit our renaissance faire opportunities, but we absolutely love our audiences at those events! (It was during this time that I married my old flame, Richelle, who comes from a faire background. She is a conventional theater professional and “gets” me, thank heaven.) 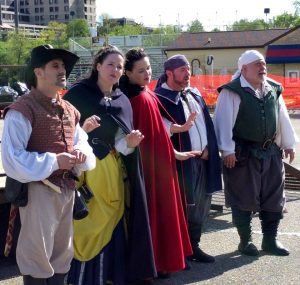 So this was a short note about a significant date that turned into a long story. This is my 40th year at the theme park that is now the Bristol Renaissance Faire. For better or for worse it has been an amazing number of years shared with beautiful people, wonderfully talented, sincere and deep-thinking intellects, friends, lovers and brothers in arms. I very much look forward to the next 40 years in the company of such amazing friends.

I consider this a real celebration and would certainly welcome any thoughts or comments about how you and I met or any fun or important things we did together.