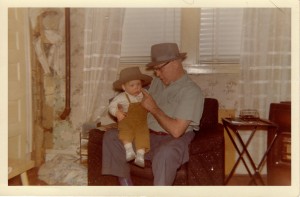 Me and my dad’s father, “Gramps.” Walter Calin Sr. had brought me a hat of my very own as I used to always pull his off of his head. The photo is marked 1962 but that may have been when it was processed; I suspect it was taken in 1961 when I was one year old. This was before Kennedy’s influence on fashion took hats off of men’s heads for half a century.